Nutrition Fact: Eating Breakfast is Good for Your Health

Breakfast is one of the most important meals of the day for both adults and especially kids. After no food for 8-12 hours of sleep (or how ever long you sleep), your brain needs food to re- charge.

I’m sure you’ve heard breakfast is the most important meal of the day.  In fact, surveys show that 90% of Americans know that breakfast is important, yet only 15-49% of Americans actually eat breakfast.  I think part of the reason is that even though we know it’s food for us, we don’t really fully understand why and how important it really is. I will admit, I’m not a super big breakfast person and before I started studying nutrition I was okay skipping breakfast most days because I never felt particularly hungry right when I woke up.  But after really learning why it’s so important,  I never skip breakfast anymore and I hope this post will help explain why and inspire you to start eating breakfast everyday too.

Why is Breakfast So Important?

The reason eating breakfast is so important is because even though you’re sleeping your body still uses energy.  Obviously you don’t require as much energy while asleep as when you’re physically active, but our organs never stop working so do use up energy!  After waking up in the morning, your body actually uses up all of its energy stores stored in your liver and you need breakfast to help replenish your reserve and maintain normal everyday functions.  Our bodies only have enough room to store about 10 hours of energy, so after dinner and rest, by the time you wake up your stores in the liver will be all depleted. Now you may say, well I’ve been skipping breakfast for years and my body had energy and you never noticed a problem.  Well that’s because our bodies are really good at trying to keep us alive.  So when it runs out of glycogen (our main energy source, particularly for our brains), our body then starts to breakdown our lean body mass (or muscles) in order to obtain more energy until you finally eat lunch or a snack.  The reason this is bad is that just by skipping breakfast, you’re losing muscle, and muscle is important for maintaining our metabolic rate.

1. Eating breakfast helps you lose or maintain a healthy weight.  First, it helps prevent loss of lean body mass keeping or improving your metabolism.  And second,  studies show that people who eat breakfast daily eat fewer calories throughout the day since it helps to curb appetite and prevents binge eating.

4. Eating breakfast helps you acquire important nutrients and vitamins from food that would be harder to achieve throughout the day if you missed a meal.

What are the Essentials of a Healthy Breakfast?

For those days you’re in a hurry and just need to grab and go here’s a few ideas you can try:

When you have at least 10-15 minutes or more to prepare and eat breakfast here’s a few ideas:

Now that you know the importance of eating breakfast and what are examples of healthy breakfast options, make a goal to eat breakfast everyday!  If you need to, start slow at first!

I LOVE eating spicy food so am obviously really excited to see that there is some research showing consuming red chili peppers may actually have more health benefits than I thought! I always knew red peppers were high in vitamins and minerals because of its bright red color, but research is now also showing other health benefits from red chili peppers derived from its high concentration of a substance known as capsaicin found in the pepper family of vegetables.

Chili peppers have been planted as a crop for the last 6,000 years.   They were first discovered in Central and South America and slowly introduced to other parts of the world like Europe, India, China and other parts of Asia.  The active compounds of chili peppers that provide the spicy pungent flavors are called capasaicinoids. When chili peppers are consumed, capsaicinoids bind with pain receptors in the mouth and throat that are responsible for sensing heat. These receptors are then activated and send messages to the brain that the person has consumed something hot and the brain responds to the burning sensation by raising the heart rate, increasing perspiration and release of endorphins.  Hence– the pungent and spicy reaction you feel when consuming them.

Chili Peppers, especially red ones are high in vitamins and minerals.  They are a good source of Dietary Fiber, Thiamin, Riboflavin, Niacin, Folate, Iron, Magnesium, Phosphorus and Copper.  Additionally, they are a very good source of Vitamin A, Vitamin C, Vitamin K, Vitamin B6, Potassium and Manganese.

What is most interesting is that one small chilli pepper provides more than 100% of your daily needs of Vitamin C!  Do you still need more reasons to like spicy foods?  Well in case you do, I have a few more additional health benefits to share.

Immunity. The bright red color of red chili peppers indicates its high content of beta-carotene or pro-vitamin A. Vitamin A is essential for healthy epithelial tissues including the mucous membranes that line the nasal passages, lungs, intestinal tract and urinary tract and serve as the body’s first line of defense against invading pathogens.  Moreover, red chili peppers are an excellent source of Vitamin C which is not only an antioxidant, but has been shown to stimulate while blood cell production which helps to fight infections.

Heart Health.  Some studies have shown that capsaicinoids from chilies can lower blood pressure and blood cholesterol.  A team of researchers from Hong Kong found that capsaicin and a close chemical relative boost heart health in two ways. First, they lower cholesterol levels by reducing accumulation of cholesterol in the body and increasing its breakdown and excretion in the feces. Second, they block action of a gene that makes arteries contract, restricting the flow of blood to the heart and other organs. The blocking action allows more blood to flow through blood vessels.  While the evidence supporting heart health seems promising, these studies have mostly been conducted via animal studies so we need more research testing the effect in humans before we know for sure how beneficial capsaicinoids can be in humans and whether or not supplements and actual red peppers pose any difference in effectiveness.  So for now, I would avoid taking capsaicin supplements, but if you eat the real thing you could hope to see some positive effects when it comes to your heart health.

Weight loss. While red chili should not be used as a weight loss supplement, there is some evidence that capsaicin can either help reduce hunger and/or increase energy expenditure.  There’s a few caveats to these findings.  First, studies that found that red pepper increased energy expenditure, used an amount that was not acceptable for the average American. (10g/meal).  Second, other studies looking at appetite and hunger actually found that the effect of curbing appetite was much stronger in individuals who were not used to eating spicy foods.  So for those of us that can eat enough red pepper to help increase energy expenditure, we probably would not also get the benefit of reducing appetite and vice versa.   In addition, the research shows that using capsaicin supplements you lose the effect because part of the effect is caused from the heat and spiciness reactions from eating chili peppers which is lost through supplement use.  So, while this is no miracle diet food or supplement for weight loss, for some of us eating red chilies we might have some additional benefit related to weight loss, whether it’s through reduced appetite or through increased energy expenditure.

How to eat it 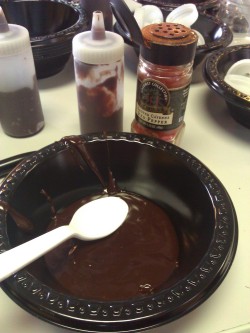